JU6500 (JU650D) and JU6700 Calibration Notes: Calibration with the 2pt white balance was more difficult than with most Samsung TVs. The Movie mode normally gets you most of the way there, but with the JU6500 it was important to turn the backlight down more. We found that we liked using the Smart LED(micro dimming) setting so keep that in mind in your adjustments. Also, as noted in the full review, you will want to change the AutoMotion Plus feature depending on the programming you are watching. With most programming you will want to turn it off or at least the De­judder portion. With Gaming you will benefit from leaving it on. The Color Space needs no adjustments for a good calibration. 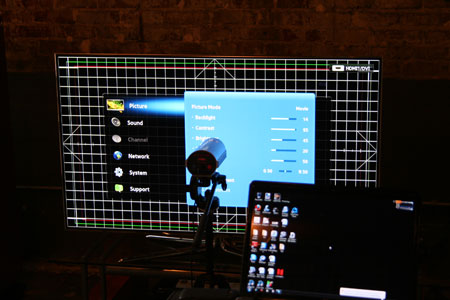 A television in the process of being calibrated before we begin our review.