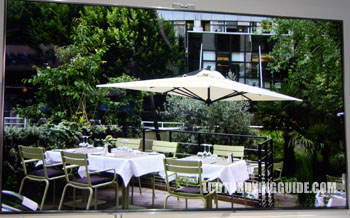 The TC-L55WT60 stands at the top of the heap of Panasonic LCD/LED TVs for the 2013/2014 year. The 55 inch set is the largest in the Panasonic LED realm. It may not be as big as some of the Sharps and Samsungs, but it is a very feature heavy set. If you aren't looking to fill a big room, this one deserves some attention. The combination of 3D playback, full 1080p resolution, the Viera Connect Smart TV platform, a host of picture quality features, and a cool modern design make the WT60 hard to beat.

The TCL55WT60 uses passive 3D to display a 3D images to viewers. The 3D effect isn't as deep and defined as some active 3D sets out there, but Panasonic's move to passive isn't a bad one. 3D picture detail is very impressive in the WT60 series. Four pairs of glasses are included with TV.

2D to 3D conversion is another strong point. Real time conversion of 2D content to 3D content looks surprisingly good, but is no real competition when compared to real 3D content. It is a nice feature that will probably be used a good deal. Even if just for experimenting.

The IPS LED panel allows for excellent viewing angles, even for an LED TV. There is very little picture degradation as the viewer moves through all the viewing angles. Panasonic claims 178 degrees, which is about as wide as it gets. This is a great improvement on one of the features that has really kept LED and LCD TVs behind. We were impressed. 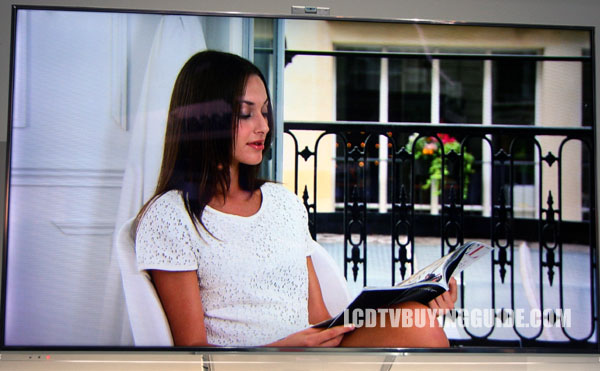 This shot demonstrates strong blacks and bright whites with a lot of detail in the lighter areas. The hint of color really pops

4200 backlight scanning sounds like a big improvement over the WT50's 1920 specification. Smoothing of motion blur and judder was well done and we see a slight improvement on over all picture clarity with the major jump here. If the aim was to provide a clearer picture during fast action scenes, I'd say well done. This setting can be turned off as it may not be appropriate for all situations.

The TCL55WT60 is equipped the with Clear Pro Panel. We have always been big fans of the clear coat screen and the benefited light flow that comes with it. Local dimming is another top tier feature the WT60 uses to set itself apart from the rest of the lineup. This allows the TV to achieve an increased contrast ratio in scenes with a lot of bright and dark areas. 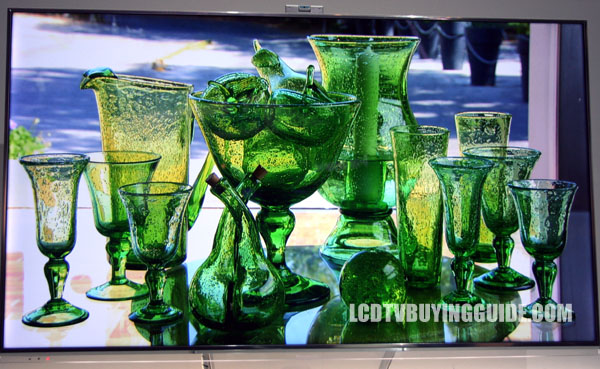 Color rendition is well done in this shot without over saturation. Also note how the foreground really stands out from the background to create a strong sense of depth

The standard Viera Connect smart TV platform is included on the WT60 series. All the usual apps are present with a couple new features.

The Touch Pad Controller is included with the TC-L55WT60. The new voice features are used with this little device. It allows the user to speak into the remote and have text appear on screen. This sounds helpful for web browsing or searching through apps, but doesn't seem too useful overall. We tried the Touch Pad Remote last year and weren't too excited about it. It is a nice inclusion overall.

This TC-L55WT60 is the first Panasonic to include a built-in camera on the TV for interaction with smart TV apps. This can be used for video conferencing in the living room too. It is a neat feature we see being implemented on more and more TVs, but we're not sure on how useful it is really going to be. Don't let it make or break your decision on which set to go with.

All but two models in the Panasonic 2013/2014 were granted the Energy Star 6.0 certification. This means the TVs use less energy more efficiently. LCDs already have a good reputation with energy consumption, and Panasonic aims to further it. Power consumption is claimed to have been reduced up to 15%.

The front of the WT60 seires shows off the new slim metal bezel and clear stand design. You can also see the retractable camera sitting on the top of the screen

The appearance of the WT60 has evolved from the WT50 in an excellent way. The acrylic clear stand truly give the screen a floating appearance. Panasonic is also going the way of the super thin metal bezel on this model, really bringing the competition against other top tier models. The 55WT60 has a very thin profile that rounds out the modern appearance of this LED TV.

This close up of the clear acrylic stand really shows how minimalistic it is. You also get a good look at the clear frame extending out from the screen