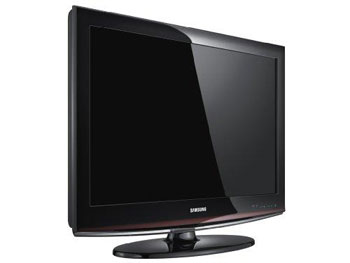 The 2011 D405 line of LCDs from Samsung replaces the 2010 4 series LCD models. These are a line of small, 720p, 60Hz, CCFL backlit LCDs. We found the picture quality of the 2010 4 series to be rather good for a line of budget TVs and think the LN32D405 would make an excellent TV for the bedroom, kitchen, office or student dorm room. The D405 can also double as a computer monitor but the 720p resolution will feel a little low in the larger models.

The D405's 720p panel calibrates easily to the optimal D6500K color temperature and though it shows a few motion artifacts it's perfomance is entirely acceptable for a television in this price range.

Blacks are deep and shadow detail is good with realistic looking colors and even backlighting. Apart from a contrast drop off at wider viewing angles that is typical of LCDs the overall picture performance of the LN32D405 is above average for a budget model.

For a small TV the bezel is rather large on the D405, it's is also quite deep when you note that TV's 4 times it's size are coming in at under an inch these days. It is not a bad looking TV but it won't wow you with it's appearance either.

The D405 series does not have internet connectivity.

The D405 series has 2 HDMI connections, a USB port, PC input and both component and composite analog video inputs.